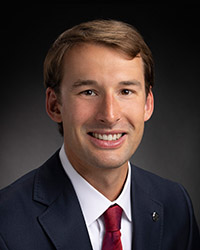 Michael Gulledge received his law degree in 2022 from the University of Montana and joined the Montana Elder Law team during his third year of law school as an intern. He developed an interest in estate planning through his family’s retention of eighteenth-century wills making Michael want to assist others in planning their estate and preserving their cherished assets for future generations.

After attending one year of college at TCU, Michael realized the Northwest was home and transferred to Gonzaga University where he completed his undergraduate degree. During college, he was a part-time sports journalist for Lee Montana’s 406 MT Sports and the Spokesman-Review where he shared the stories of local athletes by carefully listening to others and accurately telling their stories. He also interned for two Montana district court judges before law school, including a brief period helping the Yellowstone County Veteran’s Treatment Court and DUI Court. Michael was in the Margery Hunter Brown Indian Law Clinic during law school and worked for Tribes on various issues.

Born in Davenport, Iowa, Michael moved to Billings at a young age where he developed a passion for the mountains, lakes, and plains of Montana. In his free time, he enjoys hiking Montana’s outdoors, specifically the Beartooth Mountains. Additionally, he enjoys golfing, slalom skiing, cooking, and travelling.

Similar to listening while others tell their stories for a news feature, understanding a client’s desires for an estate plan is crucial to developing the best solution for a client. Michael serves clients by carefully planning and thoughtfully communicating during sensitive conversations.